When you have lots of USB devices to connect to one machine, a USB hub is the answer. But before you run off and buy a rackmount setup with 20 ports and call it a day, you’ll want to take several more factors into consideration. In this article, we will discuss all the styles of USB hubs available, along with the benefits. 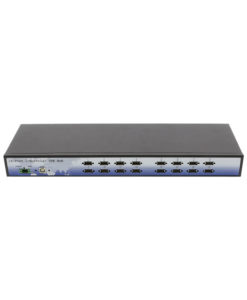 Which Type Do You Need?

To narrow down the type of hub your operation requires, you need to go through this checklist:

The protocols in current use are USB 2.0, 3.0, and 3.1. Earlier versions are obsolete. Each version is fully compatible with earlier versions; a USB 3.1 hub can communicate with a 2.0 device, though it will be limited to 2.0 data rates. Each protocol supports more than one speed, including all the ones earlier versions support. The maximum speeds are:

Compatibility runs in both directions. You can use a USB 3.1 drive with a computer that supports only 2.0, or the other way around. Of course, you’ll only get USB 2.0 speeds in either case. You should get a hub which supports a protocol version at least as high as the computer you’ll use it with.

The USB world includes many different connector types. Computers and hubs have traditionally used the rectangular Type A connector, which is notorious for being difficult to plug in on the first try with the correct orientation. The Type C or USB-C connector has no “wrong way” to plug in, and it has smaller dimensions (8.4 by 2.6 mm). It’s visually recognizable by its rounded ends.

USB-C devices usually support USB 3.1, but this isn’t always true. Check the specifications for the device you’re interested in.

USB-C connectors and cables are the same as the ones Thunderbolt 3 uses. Thunderbolt 3 ports also function as USB ports. However, ordinary USB-C ports don’t support Thunderbolt.

The small trapezoidal connectors you see on many devices are Type B, which has several varieties. Hubs seldom or never use Type B connectors.

Powered hubs have a separate power supply from a wall outlet. This ensures that all devices get enough power to charge and operate properly. A non-powered hub gets power from the computer, but it’s limited. A keyboard or mouse will work fine on a non-powered hub, but a disk driver that depends on USB for its power may not.

Devices that don’t need extra power when plugged directly into a computer may need it when plugged into a hub. The more devices a hub connects, the higher the demands are on its power source. Rackmount hubs usually support a large number of ports, so a powered one is more reliable.

Many hubs have plastic enclosures. Some are inexpensive and fragile, others strong. A metal enclosure is strong, and it shields the electronics from EM interference and magnetic fields. A rugged metal enclosure gives additional protection against shocks and spills. If a hub will be installed in a chaotic environment, a rugged enclosure is a good investment.

Sometimes peripherals develop defects. They may short out and deliver overvoltages to whatever they’re connected to. The result could be serious damage to a hub or computer. A hub with surge protection guards against such events.

The best protection is optical isolation. Such hubs have a gap which the data crosses in optical rather than electronic form. This guards against any overvoltage which isn’t so high that it arcs across the gap. That means withstanding thousands of volts.

Hubs with a rugged metal enclosure and isolation are extremely durable. They’ll withstand rough treatment and last for years.

Equipment sold to the General Services Administration needs to be compliant with the Trade Agreements Act (TAA). It requires that the finished product be made in the USA or another signatory country. While many countries are signatories, some major ones aren’t. If this is an issue, you should check the country of origin (COO) code on a hub before delivering a hub or other equipment as part of a contract.

CoolGear offers USB hubs to meet the most demanding needs. Contact us to find the products that will satisfy your requirements.